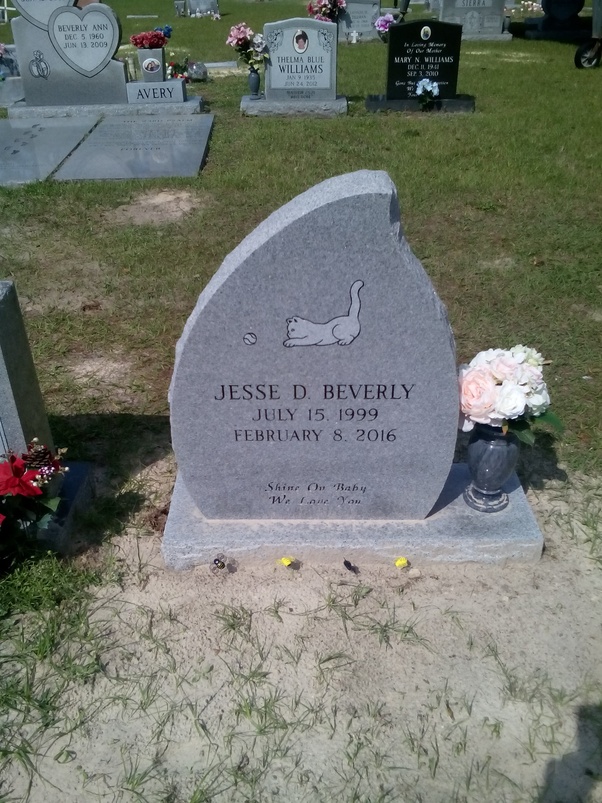 This one. This picture, taken approximately two weeks after we buried my 16-year-old son, Jesse Daniel, and his headstone was finally finished.

Jesse died of an accidental Fentanyl/Xanax overdose. I so did not see that coming-not in a million years. He was my first-born son.

The dirt is still freshly churned, with bits of grass popping through. At this point, I am still dreaming that my son is not dead, and I am nowhere near being in my right mind.

I was not permitted to go to the morgue to see Jesse after he was found dead on the sidewalk, behind the library, 10 minutes from our house on Monday, February 8, 2016.

I called the Medical Examiner’s office, pleading, begging, but to no avail. In my mind, I would not, could not, honestly believe, in the depths of my soul, that it was Jesse laying in that morgue, until I could see him with my own eyes.

I began dreaming of his name on a toe tag. I would wake up unable to breathe, and begin sobbing.

The funeral was set for Friday morning. I had to wait until Friday morning to see him, and inside, I was dying a death by degrees with each passing day. This was sheer agony.

Throughout the week, people came and went. They brought food, supplies, gifts for my other children, warm hugs, shoulders, and ears. I barely remember any of it. I do not remember half the people who came to my home. I was no longer here on planet Earth.

I remember getting ready for the funeral on Friday morning, and how surreal things were. My BFF was helping my other son and daughter with clothes and shoes.

I remember gazing at myself in the bathroom mirror, all dressed in black, my hair nice and neat, make-up in place, trying to hide the puffiness and dark circles under my eyes, and thinking, “Who is that woman? I do not know her.” I looked like a caricature in my eyes. I honestly did not feel real. This was all a very bad nightmare, and I would soon wake up.

We arrived at the funeral home at 9:30 AM. I had been told that I could spend an hour alone with Jesse, before the service began at 10:45 AM.

I remember the very kind funeral director trying to speak to me, as I made a bee-line for the room that held my precious son’s body.

I glanced through the little glass window on the top of the door, as his voice faded off into the distance, and I whispered, “Oh my God. It’s really him.”

That was it. I was off like a shot, moving rapidly towards the casket at the end of the room, glancing at the large picture of Jesse standing next to the casket, and a row of lovely plants and flowers sent by well wishers. This was not real, and yet, it was.

There he was, like an angel, appearing so serene, so peaceful. I was thinking about what a wonderful job they did with him, but I could still see bruising across the top of his forehead through the make-up, and this bothered me, so much. Had he fallen on his face, and bruised his head after taking those drugs?

I gazed down upon my baby, with heavy tears rolling down my cheeks, splashing down onto his forehead, over and over again. I caressed his hair, his face, and I cried, like I’ve never before cried in my life.

Jesse was Autistic (Asperger’s). He spent his life in sensory overload. He did not like unfamiliar crowds, like at the mall, or Walmart. This made shopping for him challenging, so, I allowed him to order many of his items on line.

Two weeks before he died, we had ordered several T-shirts for him, with all of his favorite bands.

The day he died, his very favorite T-shirt arrived in the mail, bearing a picture of Jim Morrison and The Doors. He loved The Doors, so very much. That was that.

Jesse laid in that beautiful casket, arrayed in his brand new Doors T-Shirt, that he never got to wear in life. He wore a brand new pair of jeans we had purchased around the same time, his favorite belt (he ALWAYS wore a belt :), and his favorite old Converse sneakers, with no socks. Jesse hated socks.

This was Jesse, this was my baby. He abhorred tight clothing, and a tie would never be found in his wardrobe. I wanted to honor him, as he was in life. He would want this. I had no doubt, and still don’t.

I spent the next hour, talking with him, stroking his hair, holding his hands, and somewhere, deep down inside, I kept expecting his eyes to open, and for him to open his mouth and say, “I love you, Mom.”

When the time came to receive guests and begin the service, I placed a single yellow rose in his hands, placed a gentle kiss on his forehead, leaving more tears in his hair.

After the service, we silently followed the hearse to Jesse’s final resting place. As I watched the pall bearers carrying the casket to the grave site, the tears began cascading all over again. This could not be happening, and yet, it was.

I watched in silence, hands and lips trembling, as Jesse’s friends, one by one, got up to speak about him, and honor his life. In hindsight, it was beautiful to behold.

The eulogies were now over, and the attendees were getting into their cars, to head to the memorial luncheon in Jesse’s honor.

Two men were standing by, ready and waiting to lower Jesse into the ground. I was frozen there. I could not leave. I know they did not want me there, to witness this, but I had to see it.

As they lowered the casket, I tossed another yellow rose unto the top of the casket. I blew him a final kiss, as I said, “I love you, Jesse,” and I turned to walk away, listening to the sound of the winch being lowered.

My memory is still spotty. There is much amnesia left from that moment in time. It was too painful for my mind to retain. I had what felt like many out of body experiences, because I think that I would not have survived, if I had absorbed and retained the full force of the shock and trauma surrounding my son’s death.

I spent most of the next two years absolutely lost. I faked life very well, out of necessity. My other kids need me, and I love them with my life. With or without Jesse, life has to go on. This was so excruciatingly painful to come to terms with.

Jesse’s life was an ongoing battle of two steps forward, to ten steps back. It was a dizzying, exhausting dance. In the weeks before he died, he was in more of a forward motion than he had ever been in before. He was inspired, and happy, truly happy, and he was experiencing his first true love. These thoughts do bring me some peace.

I’ve taken many other pictures of Jesse’s grave over the last three years. I take fresh flowers to his grave every two weeks on Sunday morning, but the picture I present as the centerpiece of this post, the first one I took, while that grave was still fresh? That picture marks the absolute lowest point in my life.

I’ve come a long way since Jesse died. We all have. The overwhelming pain and darkness in my heart and soul during that time nearly swallowed me whole, but God had other plans.

I will never be the same person. That won’t happen, but, in the course of my healing and overcoming, I have not lost hope, nor faith, and I know I will see Jesse again.

I have come to a place where I am once again able to be a healing, nurturing source for myself, and for others. I hope to comfort and encourage other people going through the dark night of the soul that follows the death of a child. I feel you. I get it.

I have been through much heartache, pain, and trauma in my life, as we all have, but nothing compares to the loss of my child. A huge piece of me is missing, and I feel it every day, every bit as much as if I’ve lost a limb, only you feel it on the inside, deep down in your heart and your soul.

We are never alone, and I am up to the task of offering the tenderness, kindness, compassion, and love that my fellow humans need when trying to navigate through a turbulent sea of never-ending grief and sorrow. 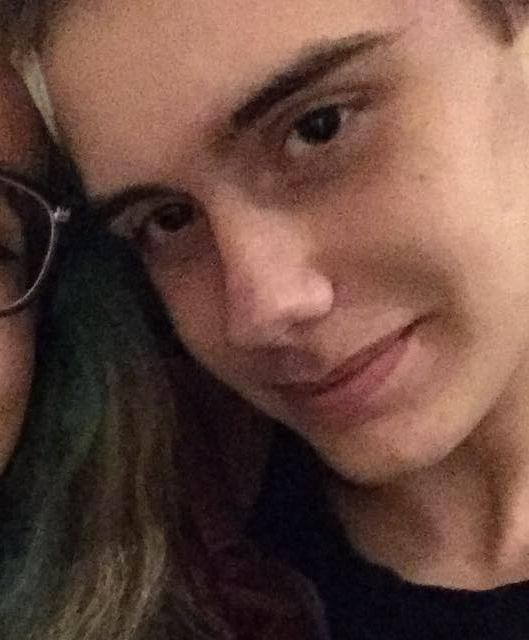 Thank you for asking, Michael, and allowing me to share a very deep, profound moment in my life.

I wish to thank the beautiful Quoran community for leaving so many lovely comments and support, and for letting me know that my sharing of my experience so profoundly is helping many of you with your personal grief journey.

There have also been several questions about Jesse, Asperger’s Syndrome, and the circumstances surrounding his death.

I have written extensively about these things in the links below. Please feel free to have a look, and I wish all of you nothing but the best.I am sending all of you many, many thanks, and much love. ♥

Sharon Gearen’s answer to How does one recover after the loss of a child? Is it ever possible?

Sharon Gearen’s answer to Have you ever had an encounter with an angel? Did it scare yo

“The best and most beautiful things in the world cannot be seen or even touched. They must be felt with the heart”

The ‘one big moment’, a turning point, that changed your life?

The birth-Day of my niece

The first job: An ad for dreams in life…

The ‘one big moment’, a turning point, that changed your life?